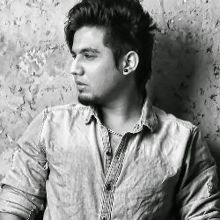 A Kay is an in Indian Punjabi Singer. His real name is Amrinder Sigh. He belonged to Punjab, Mohali. He is a growing star in punjabi music industry. He has sung almost 4 song and he is become widely known in all over India. His recently released song is Brown Munda.

A Kay is belonged to Punjab, Mohali. He has a font of singing from his childhood. Amrinder is being graduate. He started his career from his first song Kalyug. His first song made him well known in singing. He is also given many performances in college fests.

A Kay after his first song become popular in youth for his song Kalyug after that he released his 3 another song his latest song is Brown Munda is also appriciated and liked by every one. He is a recently growing singer from punjab. He is very much demanding in youths. His on of the Lost Life show his Talent and perfection in singing, and another song is Munda Iphone Warga was also huge success and crossed over 2 million hits and Views.

Why Book A-Kay Through ArtiseBooking?