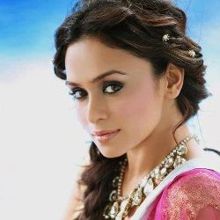 Amruta Khanvilkar born 23 November 1984 in Pune, Maharashtra, India is an Indian film actress who appears in Bollywood and Marathi movies. She has appeared in Hindi and Marathi films and established herself as one of Marathi cinema’s leading actresses and an accomplished dancer. She also anchored daily “Bollywood tonight” which aired on Zee Music. She currently hosts the program, Comedy Express, on ETV-Marathi.

Why Book AMRUTA KHANVILKAR Through ArtiseBooking?