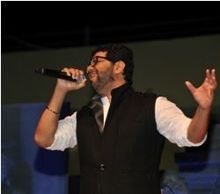 Avadhoot Gupte is an Indain Music Composer, producer, Director, Lyricist, Tv Presenter and Singer. He was born on 19 Feb, 1977. He is mostly known for his work in Marathi Entertainment Industry. His career on television has included a judge on the reality singing competion shows and anchoring his own chat show Khupte Tithe Gupte.

Avadhoot is an Indian Marathi celebrity, Television Presenter and Singer. He started his career in 2002 in entertainment industry.

Gupte first music album as a singer-composer Paus was launched by the Mumbai based company Sagarika Music. He was awarded as the best composer at the 2002 Alpha Gaurav Puraskar for this album. His next Indi-Pop album Aika Dajiba along with singer Vaishali Samant was also released by Sagarika. The album brought both Gupte and Samant to new fames After having sung for various remix songs, films and live shows, Aika Dajiba was Samant's first album. His next album came in 2003; Meri Madhubala which was popular and a hit.

He is also judging the show on Sa Re Ga Ma Pa Marathi L'il Champs on "Zee Marathi" with Vaishali Samant. This was widely appreciated and his clever interpretation and treatment of participants soon caught attention with Marathi viewers, who lauded his efforts. After that he moved to anchoring a show on Zee Marathi titled Khupte Tithe Gupte. The show invites two Marathi celebrities from various fields like entertainment, politics, sports, to discuss things that bother them. The show made a comeback with season 2 airing from 7 November 2012 with politician Narayan Rane and his wife as the chat show guests.

After anchoring and judging the show he moved to prodution and direction of films. His first veture was in 2010 Marathi Film "Zenda". His second venture was Morya based on Ganesh Festival in Mumbai, and third movie was titled as Jai Maharashtra Dhaba Behere.

Why Book Avadhoot Gupte Through ArtiseBooking?