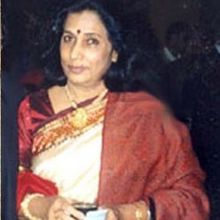 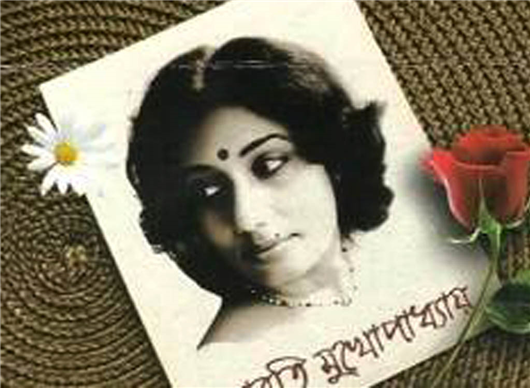 Aarti Mukerjee is an Bengali Playback Singer. She was born on 1943 in West Bengal, India. She also sing for Hindi films like Geeta Gata Chal in 1975, Tapasaya in 1976 and Manokamana and Masoom in 1983.

Aarti Mukerjee belongs to a Bengali, West Bengal. she got an Opportunity to sing in in the all India Music Talent Programme in 1955 that time she was only 14 or 15 years old teenage girl who had streams of dreams to go to Bombay and Match the height of fame as Lata Ji the lengend in Music Industry in Bollywood and Aarti goe her initial training from her master Arati Mukhopadhyay in Indian Classical Music. Aarti mainly worked in Bengali movies. She won the music contest "Metro- Murphy Contest".

After winning the singing contest "Metro-Murphy contest" her career started as playback singer. she got her first break in 1958 hindi film sahara starring Meena Kumari and music by hemant Kumar, in hindi movies She was not much sucessful after that she started sining in bengali movies. Her first playback song in bengali film called Kanna in 1962.

Her outstanding versatility and nice-pitched voice infatuated people so much that they started losing attention to erstwhile leading singer Sandhya Mukherjee. Her voice and singing style was not only different from Sandhya, but also was better than her. In the late 1960's, her voice was used to be on-screen voice of leading actress Suchitra Sen, instead of Sandhya Mukherji.

In 1966, she sang in the film "Golpo Holeo Sotyi", which earned her BFJA Award for Best Female Playback Singer. In 1976, she restored the award for the film "Chhutir Phande". She lent her voice for the leading actresses of the late sixties till eighties such as Madhabi Mukherji, Sharmila Tagore, Aparna Sen, Debashri Roy, Tanuja etc. She along with Asha Bhosle took leading spot in the 1970's, gradually replacing Sandhya. It is considered to be the cause behind the decline of a flamboyant career of sandhyaji. she sang two songs in the rakhee starrer film tapasya in 1976. The first song being 'bacche ho tum khel khilone' and a duet with kishore kumar entitled 'do panchi do tinke', which was popular. She is rumoured to have sung 15000 songs in bengali as well as hindi songs to her credit. She did playback in 96 films in 6 languages- Bengali(66), Hindi(20), Oriya(5), Assamese(2), Gujarati(2) and Manipuri(1). She continued success in the seventies that inspired her to try her fate in bollywood once again. It was R. D. Burman, who was the mentor of bengali singers who would later give Kumar Sanu, Abhijeet and Andrew Kishore their first breaks in bollywood.

In 1983, He gave her to sing the melodious song "Do naina aur ek kahani" in the film Masoom as the voice of Shabana Azmi. The song was a chartbuster and is even lilted today. It earned her Filmfare award for best female playback singer in 1983. She has also churned out a mindblowing classical song "Kabhi Kuch Pal" in the film Rang Birangi, a female duet with Anuradha Paudwal in 1983. Like Sandhya Mukherji had on-screne voice almost every film for Suchitra Sen and Asha Bhosle as Sharmila Tagore's, she has the distinction of becoming the on-screne voice of actresses Tanuja. Her popular repertoires include 'Radha banshi chara janena','Ek boishakhe dekha holo dujonar','Ei mon jochonay pa dubiye','ja ja behaya pakhi jana','na de de da, tu na tum','tokhon tomar ekush bochor bodhoy'. She also has a number of famous non-film songs to her credit. She lent her voice to a number of Hindi compositions as well.

Why Book Aarti Mukherji Through ArtiseBooking?