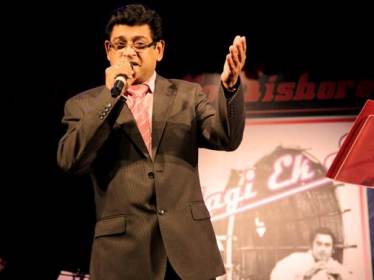 Amit Kumar is an Indian film playback singer, actor, director, and music director. He is the son of the Indian singer and actor Kishore Kumar and the Bengali singer and actress Ruma Guha Thakurta. Like his father, Amit loved singing and from childhood used to sing during Durga Pooja functions in Kolkata. Once when he was performing on stage in a Durga Pooja function arranged by Bengali actor Uttam Kumar, people kept requesting more songs and this information reached his mother. She complained to Kishore Kumar that his son was singing "filmy" songs. Hearing that, Kishore Kumar decided to bring him to Bombay.
Before that, Kishore Kumar had cast Amit as his son in two films that he produced himself, Door Gagan Ki Chhaon Mein and Door Ka Raahi (with Amit as a teenager). The song "Aa chalke tujhe, mein leke chaloon" was filmed with Kishore Kumar singing to his eleven-year-old son Amit Kumar.
He has sung many Bollywood and regional film songs since the 1970s and was more actively singing in Indian films from 1970 to 1994 as after death of R. D. Burman in 1994, citing lack of good quality music being composed and disappointed with Kishore Kumar clones like Kumar Sanu who had nasal touch and Abhijeet, who did not sing from stomach as per Amit Kumar, he withdrew from playback singing and concentrated on live orchestra shows since 1995 and continues to perform worldwide. In addition to singing in Hindi, has also performed in Bangla, Bhojpuri, Oriya, Assamese, Marathi, and Konkani.

Why Book Amit Kumar Through ArtiseBooking?