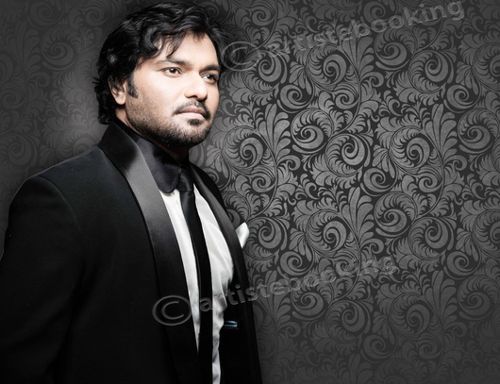 Babul Supriyo is an Indian Playback Singer. Supriyo was born (15 December, 1970) and raised in Kolkata . Babul worked in Bollywood as well as in the Bengali Movies, he is also worked as playback singer in many several Oriya Movies and in mamy other Indian Languages. He is belonged from a Musical Family.

Babul Supriyo was based from Kolkata and brought up in Kolkata. He is belonged from a very prestigious musical family in West Bengal, He is the grandson of Banikantha N C Baral, who was a Famous Bengali Vocalist and composer, he was extensively trained by his grandfather since early childhood and further to Rai Chand Boral, Who is Considered one of the most accalimed composer. The Young Babul went on to winning several inter-school musical accolades while in Don Bosco. He was "All India Don Bosco Music Champion" in 1983 and awarded "The most enriching talent" title in 1985 as well. While in college, in Calcutta, he won almost 45 inter-college music competitions in different categories and was also a regular performer of AIR and Doordarshan since childhood. Babul is also a good and Intelligent student in his schooling period, he is a commerce student and he is completed his Schooling and Graduation in 1991 from Calcutta university in Kolkata.

Shortly, he began his venture into the World of Foreign Tours with none other than Amitabh Bachchan in May 1993 in USA and Canada. Thereafter in 1994 and 1995 his regular tours with all-prominent film stars gained him recognition among the International audience. In July 1997 and April 1999, he accompanied the legendary "Asha Bhonsle" to her concerts in USA and since then performed with her in prestigious concerts all over. After many successful tours abroad, Babul become extremely popular in the centers like the USA, UK, Holland and South America, where he regularly features in musical Concerts. In July 2002 he was honoured with a "Honorary Citizenship by the State Council of Atlanta", United States of America; he being one of the youngest ever performer to receive such a recognition.

He was very well received by the audience in his first non-film album, titled "Khoya Khoya Chand" with Alka Yagnik. His solo debut album "Sochta Hun" released in March from Universal, which was launched Amitabh Bachchan and was very successful. He was honored by M T.V. IMMIES Award. He has recorded three album of Rabindra Sangeet (Tagore's songs), Kotobaar O Bhebechinu, Jodi Jantem and Mone Robe released in 2011. He also gained popularity as being one of the judges for a Bengali TV reality show on music, named Sa Re Ga Ma Pa Lil Champs.

Babul after completed his studies from Kolkata University, he got a job in Standard Chartered Bank which was his First Job, But Babul has more Interest in Music, he always want to be a Music Composer and "Playback Singer". he felt to do something more "Off-beat".

Kalyanji Anandji composer duo, gave him a break, and took him to perform abroad at their live shows. and he soon got noticed by other composers. Besides playback singing, he has also done several stage shows across the globe. During the mid-nineties, he started making his presence felt in Bollywood by delivering back to back hits like ‘aati hai to chal’(saath rang ke sapne), ‘aaj meri zindegi mein’ (Khiladiyon ka khiladi), O piya piya (Agnisakshi),"Hata sawan ki ghata" (Hello Brother) etc. However, he hit big time with "Dil ne dil ko pukara" (Kaho Na Pyar Hai), where he lent his voice for the "Greek God Heart-throb of the Nation" Hrithik Roshan. Thereafter, there was no looking back Babul Supriyo.

He soon became a regular in the highly competitive arena of playback singing and delivered hits like His title song Sanson Ko Sanson Mein from national award winning film Hum Tum, apart from topping the charts, has won him a lot of critical acclamations along with major award nominations has sung some memorable Hindi film songs such as "Dil Ne Dil Ko Pukara"(Kaho Naa... Pyaar Hai), "Pari Pari Hai Ek Pari" (Hungama), "Hum Tum" (Hum Tum) and "Chanda Chamke"(Fanaa). He is the anchor of the hit television show K for Kishore. Babul is also known for singing the opening themes of well known Balaji Telefilms serials.

Babul Supriyo is a Multi-Talented Parsonality with many with his Singing talent he has also worked as Actor. He is starting his acting career from Majumdar's Bengali Film chander Bari in 2007 as Lead Actor (Tarun). He is also worked in next film that is a remake by Uttam Kumar's "Ogo Bodhu Shundorui" Based on fair Lady' 1980 where he played a lead role in this movie.

Babul featured in debutante Sameer Tiwari's upcoming comedy film Mr Joe B. Carvalho along with Arshad Warsi, Paresh Rawal, and Jaaved Jaffrey. The film is being produced by Bhola Malviya, a close friend of Supriyo's. The moive released in 2014.

Why Book Babul Supriyo Through ArtiseBooking?