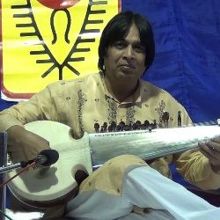 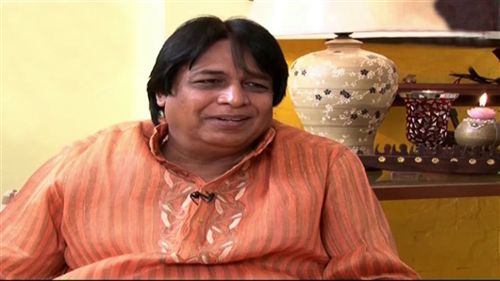 Brij Narayan, the eldest son and disciple of the world-reknowned Sarangi maestro Pandit Ram Narayan, was born in Udaipur, Rajasthan in 1952. Brij Narayan became greatly fascinated by the sound of the Sarod and began his musical training soon after under his father whose powerful musicality and adaptability to a wide range of 'gharanas', provided him the tools to develop his own original style. An outstanding outcome of this experience enabled Brij Narayan to incorporate a bow-like quality to his plectrum. The influence of his father's Sarangi style is evident in his playing. Another feature of his father's training is the method of 'Raag vistaar' or development of a raag. Pt. Ram Narayan's extensive experience with accompanying some of the greatest vocalists of the time provided him with a deep insight into the theory of traditional performance methods.
Pandit Ram Narayan employed the finer nuances of these music schools and has successfully developed a system of performance that is unique. Brij Narayan has fully embraced the traditional system and is able to express his music with the confidence and mastery that comes from sound training.
Brij Narayan also acknowledges the tremendous influence of Ustad Ali Akbar Khan, Pandit Chaturlal, his uncle who gave initial introduction to the science of rhythm, remains one of the strongest elements of his style of playing. He has inherited his father's fiercely independent outlook and has succeeded in carving a unique niche for himself among instrumentalists in India. His playing is a remarkable fusion of a variety of components including a commanding tonality, constant imagination in the melodic structure and rythmic improvisation.
Pt. Brij Narayan has been performing on the concert stage since he was a teenager. Over the years he has appeared in numerous music festivals all over India and abroad. He has also been actively involved in teaching, introducing classical indian music to students through his participation in teaching programs run by Universities/Colleges in India, the US and Europe. Noteworthy are his teaching programs for the Jeunesses Musicales de France (JMF) to conduct lectures and performances in the school system in France.
Some other prominent universities where he has taught and lectured at are the Pittsburgh Univ.,Cornell Univ., Pennsylvania Univ.,Univ. of Oklahoma, Chicago etc.
Presently, he is the Chairman of the Akal Academy in Himachal Pradesh where he has been teaching young students a number of instruments since the past four years.
Pt. Brij Narayan has recorded several CDs and LPs all of which have been very well appreciated by musicians and connoisseurs alike.
Pt. Brij Narayan has been honored by several cultural organisations, the latest being the Sudhanshu Award 2008 by the Keli Festival. He continues to strive for perfection, making his Sarod speak lyrically and musically in a way that is rare indeed.
As a result of over 35 years of unerring dedication to his art, Pt. Brij Narayan is rightfully considered the finest Sarod player of his generation.