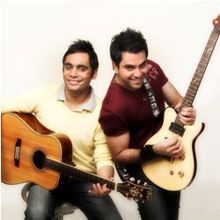 Call is a Music Band from Lahore, Pakistan. The found in 1994 and formed by Zulfiqar J. Khan Danish J. Khan, Khurram J. Khan and Omer Pervaiz. In 1996 the guitarist Omer Pervaiz left the band for concetrate on his solo project. On October 20, 2001, Danish J. Khan, the band’s vocalist and lyricist, performed for the last time and later on left the band. Khurram Jabbar Khan moved to the United States, Zulfiqar J. Khan concentrated on his band Paradigm (which later became Entity Paradigm) while Ahsan and Faisal moved on to fulfill family obligations.

On October 20, 2001, Danish J. Khan, the band’s vocalist and lyricist, performed for the last time with the band at a rock festival on his birthday. Once the band’s primary lyricist and vocalist was gone, the members of the band got busy with other things. Khurram Jabbar Khan moved to the United States, Zulfiqar Jabbar Khan concentrated on his band Paradigm (which later became Entity Paradigm) while Ahsan Fida Khan and Faisal Murtaza moved on to fulfill family obligations. In September 2002, Khurram Jabbar Khan, being a core member, returned from the United States to revive Call. Khurram Jabbar Khan auditioned for new band members and decided that this would be an urdu project. They found Junaid Khan's voice to befitting for the band’s musical direction and recruited him as the band’s vocalist. Soon Sunny was chosen to be on lead guitar, Usman Nasir on rhythms and Sultan Raja on bass. Khurram J. Khan joined in on drums.

In 2005 the band become stable and released their first album name as Jilawatan. The album was finally released in November and topped the vibes chart and stayed there for a lengthy amount of time and the released with a single titled Sab Bhula Kai. After some time the band released their third album with two more singles such as Kuch Naheen and Bichar Kai Bhee both songs were highly appreciated by everyone.

On September 9, 2009 Call released the music video of their song "Aasmaan" through their forums. Call released three smash hit singles; "Ho Jaane De", "Yeh Pal" and "Dhadke Jiya", the latter two being tapped in to by Bollywood as soundtracks for two different movies, which topped the charts and received positive reviews. Then the romantic number, "Dhadke Jiya", that may take some getting used to since it is much different from the band's popular genre, alternative rock. It can also be seen as the band's attempt to go more mainstream as far as the South Asian region is concerned. "Dhadke Jiya" doesn’t offer the same high as Laree Chooti", soundtrack from Bollywood film "Ek Chalis Ki Last Local" or "Yeh Pal", snapped up by the movie "Aasmaan", though the arrangement holds its own with an orchestral feel in the chorus, as opposed to relying on strumming the chords throughout the song.

On June, 2013, Call announced their new band member "Yasir Jaswal", ex-member of Rock band "Irtaash". Although, no new albums or singles have been launched sinced the announcement, as Zulfi is busy in his successful project "Nescafe Basement" as the producer of the show.

Why Book Call Band Through ArtiseBooking?