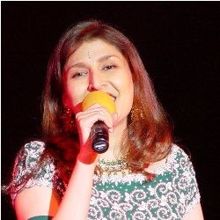 Having made Lata Mangeshkar as her idol, her standards are decidedly of a tall order, which she hopes to achieve by singing various types of songs with all the music directors. At the moment she has putting finishing touches on her soon to be released pop album which has new themes collaborating with several international musicians in the United States. Also currently in progress is another fusion lounge album based with a classical touch and experimentation with classical themes. She is also working on going back to her roots in classical music and planning a series of classical music concerts.

Why Book Chandana Dixit Through ArtiseBooking?