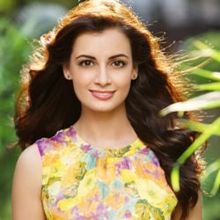 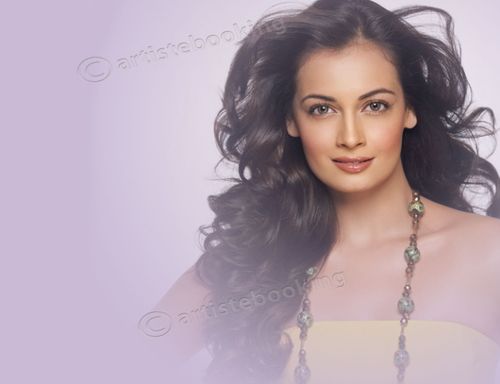 Dia was born in December 9, 1981 in Hyderabad, Andhra Pradesh, India. Her dad's name was Frank Handrich, a German National, and an Interior Designer by profession, and her mom, Deepa, is Bengali-speaking. Deepa and Frank separated when Dia was 6, and Frank passed away three years later. Deepa then married Ahmed Mirza. The family lived in Khairatabad near Hyderabad and she completed her schooling in Vidyaranya High School and in Nasr School. Her step-father passed away during 2004. At the age of 16, after completing her 10th standard, she got a job with Sriven Multi-Tech in Hyderabad. This job paved her way to modeling assignments with Lipton, Emami amongst others. With this exposure she was encouraged to participate in the 2000 Femina Miss India Beauty Pageant, which she did, came up the second runner-up and won three titles namely Femina Miss India-Pacific, Sony Viewer's Choice Award, and Miss Beautiful Smile. She went on to be crowned Miss Asia-Pacific on December 2, 2000 at Manila, making her the second Indian to win this award after a gap of 29 years. She debuted through 'Rehnaa Hai Terre Dil Mein' which could not do well at Box Office. Then she appeared in various movies like 'Dum', 'Deewanapan', 'Tumko Na Bhool Paayenge', 'Tumsa Nahin Dekha - A Love Story', 'Parineeta', 'Dus', 'Lage Raho Munnabhai' etc. She could not grow up as an Actress. But she has garnered a lot of praise for her social work. She has also got an IIFA 2012 Green Award for her contribution towards green environment. She has done various awareness campaigns on prevention of female feticide, HIV awareness, PETA, Cry. She also publicly supported the Naramada Bachao Andolan. She has also written articles for Hindustan Times and other publications.

Why Book Diya Mirza Through ArtiseBooking?