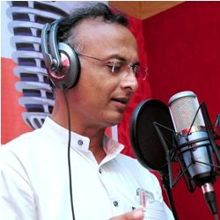 Girish Panchwadkar (born 1 July 1960) is an accomplished Marathi singer and music director from India. He is a well known singer in Marathi Light music. . On 2nd march 2009 he performed 'Marathi Bhavgeet Maifal' in Rashtrapati Bhavan-New Delhi in front of Hon. Rashtrapatiji-Pratibha Patil. "Kshitij" is the 1st group in Maharashtra to perform Marathi Songs in Rashtrapati Bhavan. "Kshitij" group performed over 750 programs all over India till date. In the year 2009, Hon.Union Power Minister Sushilkumar Shinde had invited him to perform at his Delhi residence. The program was appreciated by Hon.Chief Minister of Delhi Sheila Dikshit, Governor of Rajasthan Prabha Rau.