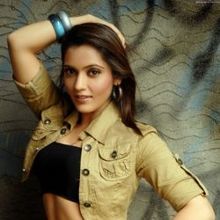 Jivida Astha started her career with the blockbuster Film, ‘Taal’ where she played Aishwarya Rai’s sister. Jividha also played the lead role in the bollywood film, ‘Yeh Dil Ashiqana’. Later the actress headed towards south, she did a couple of South Indian films as wellas she worked with the television. Presently the damsel is working in Punjabi Cinema. Jividha aade her mark in Punjabi Cinema with her very first film with Gurdas Maan ‘Mini Punjab’ and where she had played the role of a young vibrant and fun loving, medical student, Simran, she received appreciation all over for her work. Even after all the success the actress is with both her feet on the ground. The very talented Jividha proved her acting skills yet again with her next Punjabi film, ‘The Lion of Punjab’ opposite Diljit Singh Dosanjh, followed by giving another blockbuster film ‘Yaar Anmulle’ a multi starrer film, Arya Babbar, Yuvraj Hans,Harish Verma, Jenny Ghottra, Kajal Jain. Now the actress is all set to be seen in her new Punjabi film, ‘Dil Sada Luteya Gya’ Jividha Ashta is also doing a song in the much talked about Punjabi film ‘Pinky Moge Wali’.