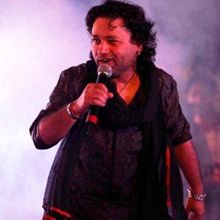 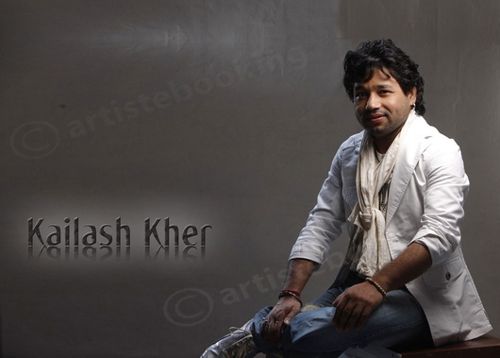 Kailash Kher is an Indian Pop Rock Singer, Music Composer and Playback Singer. He was born in ( July 7, 1973 ) Meerut, Uttar Pradesh, India. His music sytle is influenced by Indian Folk music. His singing genres are Indie, Bollywood, Playback Singing, Sufi, Folk. He is active from 2003 in Indian Music Industry and well known in world wide for his singing. kailash has singing in 18 Indian languages and he sung over 350 songs in Hindi film Industry.

Kailash bron in Meerut, Uttar Pradesh on 7th july 1973 in Kashmir based family, his father Pt. Mehar Singh Kher and his mother Chandrakanta Mehar Singh were from Meerut. His Father is a Hindu Priest, who was a Amateur Musician performed tarditainal folk singer. Kher was bron in Musical Atmosphere he was so facinated by his father music he always used to listen his father music and in his small age he started learnt music form his father, he has a wonderful and powerful voice through to his voice he impessed everyone.

Kailash was inspired by the Nusrat Fateh Ali Khan and Classucal Singer Pandit Kumar Gandharva. At The age of 14 kher left his home in search of a Music Instructor for him or Guru. But he was unable to find a Guru for him, so he started learnt music himself by listening music Kher listened to Indian Classical Pandit Kumar Gandharv, Pandit Bhimsen Joshi, Pandit Gokulotsav Maharaja and later even Nusrat Fetah Ali Khan, Lata Mangeshkar and their Contemporaries.

He got married to Mumbai-based Kashmiri woman Sheetal on 14 February 2009, and they have a 3-year-old son Kabir.

Kher choose singing as is career option, In 2001 Kher moved to New Delhi to Mumbai, where he struggled for being a professional singer in music industry. In starting of his he worked for jingle Nakshatra Daimonds, but he was not being so popular in industry for his jingles he got 5000 rupees which need him desperately and he was very happy when he get that amount.

Kailash did so struggle to get chance in bollywood, he got opportunity to sing a song for the movie Andazz. In this movie he sang a song name "Rabba Ishq Na Hove" become much popular. After that he sang a song Allah Ke Bande from Obscure movie Waisa Bhi Hota Hain Part 2, from this song kher become known and this song made him a popular singing star in Bollywood. Kher has a uniquely soulful, raw, high-pitched voice. He sang a number of the songs in the Bollywood film Mangal Pandey: The Rising, in which he had a cameo appearance. His another famous song is "O Sikander" from Corporate. The song "Teri Deewani" from the album of the same name by his band Kailasa and the song "Ya Rabba" from the movie Salaam-e-Ishq: A Tribute to Love had record sales.

He is also worked as music director like Chandini Chowk To China, Dasvidaniya, Sacred Evil, Sangini, and many more

Kailash formed a band with Delhi based brother name as Paresh Kamath and Naresh Kamath. The band's first album ‘Kailasa’, released in March 2006, went on to revive the Indian pop music market. The album was an immediate smash hit. Their second album, Jhoomo Re released in May 2007, went on to be an equally smash hit. With songs like "Saiyaan" touching the right chords with Indian as well as international audiences. Kailasa's third album Chandan mein released in June 2009, was yet another smash hit! This Hattrik Hit got him his first international album on the acclaimed independent record label Cumbancha. He released his fourth album Rangeele was released by his owned company Kailasa Records in January 2012. There is also an album called "Ya Rabba" by Kailash Kher.

Kailash Kher and his band Kailasa has performed over 800 concerts in approximately eight years across the globe. Recently Kailasa performed at Dhaka in Bangladesh, Nairobi in Kenya, London and Leicester in the UK, Karachi in Pakistan and Muscat in Oman.[29] His performance on 14 April 2012 in Karachi, Pakistan received overwhelming response. He has appeared in various television shows, including Saregamapa Lil Champs (Zee TV), Mission Ustaad (9X), Indian Idol (Sony), IPL Rockstar (Colors) and Rock 0n (MTV).

Why Book Kailash Kher Through ArtiseBooking?