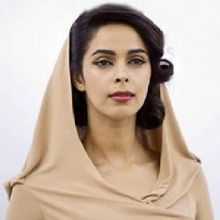 Mallika Sherawat (born Reema Lamba) is an Indian actress and a former model. Known for her bold onscreen attitude in such films as Khwahish (2003) and Murder (2004). Sherawat has been frequently featured in the media as a sex symbol. She then appeared in successful romantic comedy Pyaar Ke Side Effects (2006) which won her much critical acclaim. She adopted the screen name of "Mallika", meaning "empress", to avoid confusion with other actresses named Reema. Sherawat attracted notice with her appearance in the 2003 film, Khwahish. In 2004, she starred in Murder, a film inspired by Hollywood's Unfaithful. She received a nomination for Best Actress at the Zee Cine Awards for her performance in Murder. The film went on to become one of the biggest hits of the year. In 2009, Sherawat starred in a Hollywood film named Hisss, co-starring Irrfan Khan and directed by Jennifer Lynch. The film, based on the legend of Naga, is an independent co-production between the United States and India. Sherawat starred in another Hollywood film, Politics of Love, aka Love, Barack, directed by William Dear. She plays Aretha Gupta, a devoted local Obama volunteer coordinator. The film is a romantic comedy set during Barack Obama's campaign for the US Presidency. First look of Love, Barack was unveiled by Sherawat at Cannes 2010. Sherawat won the 2008 Renaissance Artist Award at the 16th Annual Diversity Awards held in California. On 14 August 2009, Sherawat received a career recognition Honorary Citizenship of Los Angeles for her career achievements and charitable efforts.

Why Book Mallika Sherawat Through ArtiseBooking?