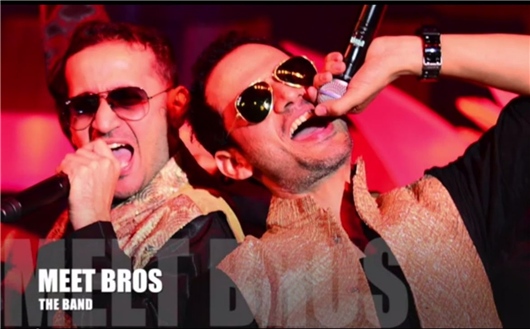 After recording all these Albums, the next leaf in the career of Meet Bros was, launching their own music company and hence they launched MEET BROS MUSIC CO. on 9th of May 2008. Their first song ‘Jogi Singh Barnala Singh’ from the album Boond became a hit which motivate them to switch from acting to music.

The latest feather in the cap is, they have formed their own group as Music Directors, branding themselves as ‘MEET BROS ’ Their first movie as music directors is a comedy called ‘Do Duni Chaar’ with Rishi Kapoor and Neetu Singh. Keeping up with the pace of music direction, The duo joined Anjjan after meeting them in a concert to add flavour to this world of music. They together have composed and performed songs for Bollywood movies such as Policegiri, Oh My God!, Kyaa Super Kool Hain Hum, Yeh Dooriyan, Paan Singh Tomar and Isi Life Mein.

Their compositions “Baby Doll” from Ragini MMS 2 and “Pink Lips” from Hate Story 2 featuring Sunny Leone has been an instant hit among the younger generations. They have also waved a composition for Salman Khan to sing for Kick which rocked the charts.

While at the moment, not much can be revealed about their new projects, what remains assertive, however, is that once again Meet Bros Anjan have raised the bars and given a new definition to “music” bringing forward new sounds and fresh melodies which further goes on to highlight their work of talent and exciting innovation..

Meet Brothers are professionally trained and well singer and Music Composer. They almost worked in 70 movies and album songs and their top Ten Movies songs are like Race, Jab We Met, Metro, Pyar Ke Side Effects, Dhol, Bhagam Bhag, Billu Barbar and many more. Meet Brothers first Album is Jogi Singh and Second is Tanha or third one was Pyar Humein Kis Modh Pe Le Aya under the banner of T- Series.

Their next video song 'Aye Bhai Tune Pappi Kyun Li' featured by Mika Singh was one of the popular song by them, That song was based on real life Incidant of Mika Singh. This also liked by everyone. After Pappi followed Nakhra Nakhra a foot tapping Punjabi Number this one was played across all the clubs and weddings. After releasing their another album with Neha Kakkar Indian Idol Season 2 Winner followed by Arshi with a super hit tarck "Dekh Jawani Dekh" by Meet Brothers.

Their first movie as music Director is a comedy called Do Duni Chaar with Rishi Kapoor and Neetui Singh. The next music director Venture Include Deepshika.

Adding yet another jewel to their crown, Meet Bros Anjan have now joined hands with Rajshri Productions in their forthcoming film “ISI LIFE MEIN”. With a total of 7 songs composed by them for this film, these songs cover all genres according to the various situations and moods depicted in this movie. The Much appreciated Background score for this film is also a creation of the trio. While at the moment, not much can be revealed about their new projects, what remains assertive, however, is that once again Meet Bros Anjan have raised the bars and given a new definition to “music” bringing forward new sounds and fresh melodies which further goes on to highlight their.

Why Book Meet Bros Through ArtiseBooking?