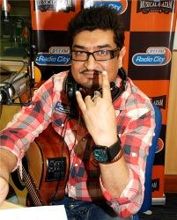 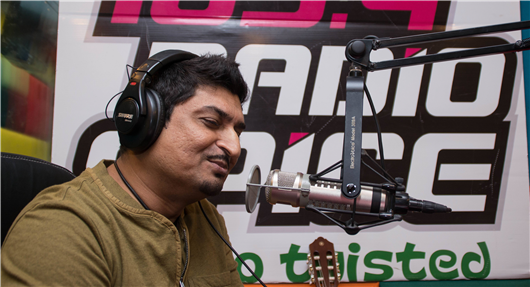 Neeraj Shridhar is an Indian playback singer and Song writer. Neeraj belong to Jalandhar Punjab. He is the lead vocalist in Bombay Vikings Band. His band gain so popularity in India and all Over The world.

Neeraj Shridhar is hails from Jalandhar, Punjab India. Neeraj formed his band name as Bombay Vikings which is so popular band in India for his songs. Neeraj started his playback singing career in 2006 with the song Tumko Dekha for the film "God Tussi Great Ho". Neeraj married and he has two babies one is Neevan and second one her daughter Rohini.

In 2006 Neeraj started his career in playback singing, he got so name and popularity in solo singing also. Neeraj got many assignment in movies for singing songs.

After this, Neeraj tasted a huge amount of continuous success in Bollywood. Right from the beginning of 2007, he delivered hits like "Ticket To Hollywood" (Jhoom Barabar Jhoom), "Heyy Babyy" (Heyy Babyy), "Ishq Subhanallah" (Mere Baap Pehle Aap), "Ishq Ka Kalma" (Dhan Dhana Dhan Goal), and the biggest of them all "Bhool Bhulaiyaa" (Bhool Bhulaiyaa), commonly known as "Hare Raam Hare Raam." This Akshay Kumar star song was the biggest hit of the year and was nominated for the Filmfare Awards with the songs "Ticket To Hollywood" and "Heyy Baby." Neeraj also co-wrote the song "Bhool Bhulaiya" with Sameer. Success continued when Neeraj gave hit after hit. Soon he gained the experience of working with almost all the main Bollywood music directors. Till date he has worked with Sajid-Wajid, Salim-Sulaiman, Pritam, Shankar-Ehsaan-Loy, Vishal-Shekhar, Nadeem-Shravan, Anu Malik, Sandesh Shandilya, Aashish Pandit, and many more. He has mostly worked with Pritam. Although he has never worked with Salim-Sulaiman on a Bollywood song, he worked with them for the song of the famous television reality show Khatron Ke Khiladi, the Indian version of Fear Factor.

In 2012 Neeraj sang songs like 'Papa Toh Band Bajaye' (Housefull-2), 'I'll do the talking (steal the night)' in Agent Vinod and 'Tumhi Ho Bandhu' (Cocktail). On 20 December 2012 he performed in Hyderabad during Qualcomm's annual event Qutumbotsav. On 21 December 2012, he performed in Pune during Cybage's Annual Bash at Magarpatta city. On 8 February 2014, he performed in Noida during Amity University's annual fest AYF.

Why Book Neeraj Shridhar Through ArtiseBooking?