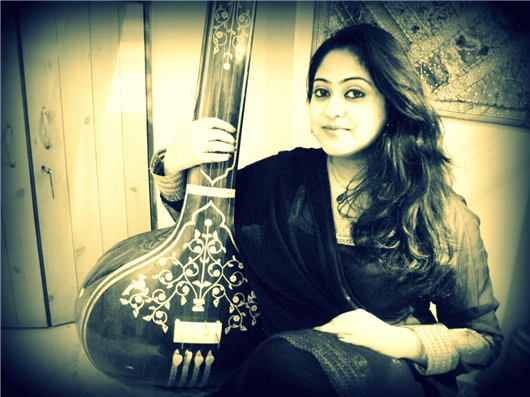 NEHA RIZVI is the fresh new voice in the world of music. Daughter of world renowned Ghazal maestro Rajkumar & Indrani Rizvi,she has been performing since her childhood & doing shows in & abroad India. Neha carries forward the rich heritage of the Kalavant Gharana of Indian classical music. Besides her training in classical music, She also has an equal command over Ghazals, Bhajans, Sufi, Bollywood and Folk music as well as excels in Western music and Jazz.As a school student, she participated in many competitions and won several accolades such as the ‘Nehru Bal Sangeet’ & ’Sur Sringar’ Awards besides a number of championships at State and National levels. As an artiste, Neha has participated in the popular musical reality shows such as ‘Aao Jhume Gaye’ (SAB TV) and ‘Saregama’ (ZEE TV) and ‘Waar Parivar’ (SONY TV).

During her television shows, her voice and singing style was admired and appreciated by Bollywood’s music luminaries including Jatin-Lalit, Ravindra Jain, Udit Narayan, Bappi Lahiri, and Kumar Shanu. Neha has performed all over the country as well as abroad performing live on stage with her sister Runa Rizvi. She also regularly assists her father and sister in taking musical workshops in the United States and Canada.

Neha debuted as a playback singer in the Bollywodd Film Ashiqui.in (2011) with a song called 'Black Cinderella', She sang recently a song called 'VandeMataram' from the Film 'Myoho' (2012).She also sang in the Sangeet Mahaotsav a seven-day musical festival in the memory of Ustad Sultan Khan & shared the stage as well as performed with Bollywood artistes such as Saleem-Sulaiman, Aakriti Kakkar , Karsh Kale & music legends like Ustad Zakir Hussain ,Ustad Rajkumar Rizvi , Ustad Rashid Khan Sahab & Ustad Faisal Qureshi.

Neha has recently sung in "Khazana " A Festival of Ghazals on the 26th & 27th of July at the Oberoi Trident Hotel, organised by Mr. Pankaj Udhas & has shared the stage with artists like , Mr. Pankaj Udhas himself, Mr. Talat Aziz , Mr. Anup Jalota , Kavita Seth & Ahmed hussain & Mohammad Hussain.

Why Book Neha Rizvi Through ArtiseBooking?