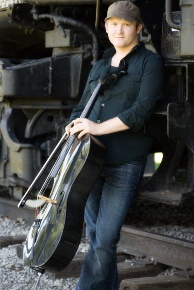 Cellist Nicholas Gold has been the winner of many diverse competitions and awards throughout the United States. The classical Voice of New England describes his playing as “…precise and assured, seeming impeccable… He’s clearly a musician to watch.” Some of the awards he has won include University of Massachusetts concerto competition, Huntsville Symphony young artists competition, Ruth Cole Weber Scholarship, and he was named the 2004 Brevard Music Center’s Outstanding Artist. While attending The University of Massachusetts, Nicholas was honored with the title “Dean’s Scholar.” The Dean created this specific scholarship in order for Nicholas to attend the University without any monetary stipulation. In addition, the Chancellor also awarded him with the much sought after “Talent Award.” Nicholas has also been a national finalist in the prestigious Music Teachers National Association and the American String Teacher’s Association’s solo string competitions.

At the age of twenty-five, Nicholas has excelled as a soloist and has been heard from coast to coast. Recent engagements have included concerts at Merrimack Hall, Birmingham Museum of Art, Smith College, Amherst College, New York City’s Hudson Gardens, New York City School for Strings, Colorado’s Convention Center, Stanford University, and Interlochen Center for the Arts. Nicholas has played include the Schumann Concerto with the UMass Orchestra, solo collaborations with James Buswell and Ellen DePasquale with the Blossom Chamber Orchestra, and performances of the Schubert Cello Quintet the Lark String Quartet in Washington D.C.  This past season he has been featured playing solo broadcasts on Nashville WPLN’s “Live from studio C” as well as performing on various television specials. Recent televised collaborations have been at the Ryman Auditorium for the Haiti Relief, Trinity Broadcasting Network, and national broadcasts on PBS with Orla Fallon and David Archuleta, performed at the Tennessee Performing Arts Center. Recent chamber collaborations have been with the Nashville Chamber Society, Nexus Chamber Masterworks Series and faculty concert series at Austin Peay State University, Vanderbilt’s Blair School of Music and Belmont University with the Nashville Ballet.

Why Book Nicholas Gold Through ArtiseBooking?