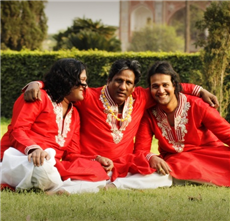 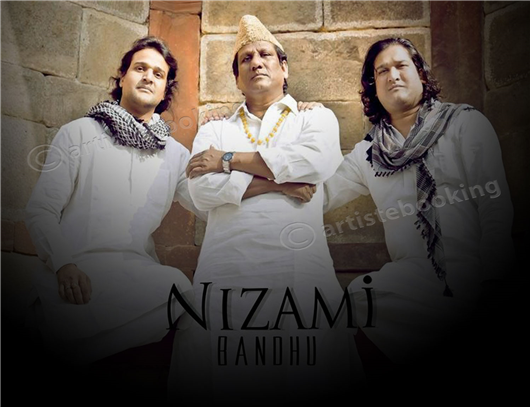 Ustad Chand Nizami (son of Ustad Mehmood Nizami), Shadab Faridi Nizami and Sohrab Faridi Nizami (both sons of Late Ustad Ghulam Farid Nizami) are better known as the Nizami Bandhu in the world of music. Initially trained in both qawwali and classical vocal music by their father and grandfather, Late Ustad Mehmood Nizami (Sultan Ragi), at a very young age, they belong to the very famous Sikandra Gharana, whose singers have had the privilege of being Darbari singers of the Asthana of Hazrat Nizamuddin Aula and Hazrat Amir Khusro for the past seven hundred years. The Nizami Bandhu are very famous and popular qawwali singers, and are among the top ranking singers of the country. They have travelled widely and performed all over the world, including concerts in: France, Germany, Italy, England, Paris, Mauritius, Iran, Tanzania, West Indies, USA, and at the Seventh World Hindi Conference in Suriname (organised by the ICCR, Govt. of India). Some of the prestigious events for which they have been invited to perform in India are: Jaahan-e-Khusro Festival New Delhi (2003), Bhakti Utsav Festival New Delhi (2003), Qutub Festival New Delhi, Virasat Festival Dehradun, Udayan Music Festival Mumbai, ITC Sangeet Research Academy Kolkata, Spic Macay tours to Gujarat, Rajasthan, Punjab, Guwahati and other places, and the International Trade Fair New Delhi. The Nizami Bandhu have also recorded their music for the Archives of the Sangeet Natak Academy. They have many CDs, DVDs, audio and video cassettes to their credit, and have also done playback singing in film.

Why Book Nizami Bandhu Through ArtiseBooking?