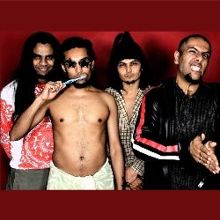 Pentagram is an Indian Rock Band fromed in Mumbai in 1994. The know as pioneers of original Indian Independent music. Their geners are Electro and Rock. Their Members are such as Vishal, Shiraz, Randolph, Makarand Mane. The band is associated with Vishal-Shekhar Shaa'ir. Pentagram were MTV India's Artist of the Month in 1997. They also won the Channel [V] Awards for the best live band and best Indian Band in 1997 & 1998. They also were featured in Big Gig on Channel [V].

The band is basically formed and known by Vishal Dadlani and Shekhar, Randolph Correia on guitars, Clyde D Souza on guitars, Papal Mane on Bass and Shiraz Bhattacharya on Drum. All of them are recently active. Pentagram received their intial recognition and fame by winning three major rock competions at IIT Kanpur, IIT Delhi and IIT Bombay of these, livewire landed them a record deal. This record deal with plus music led to the release of their debut album We Are Not Listening in 1996. support their debut the band released two videos which were frequently played on music channel but failed to generate any credible sales. "The Price of Bullets", which featured famous poet Javed Akhtar and popular Indian classical artist Shankar Mahadevan. As a minor publicity stunt that failed, the video, directed by Farhan Akhtar, was blacked out by channels across the board for being "too politically loaded". It was then added as a bonus track on their second album Up.

The second album, Up (2002) saw the band’s sound evolve into a deliberate, definitive electro rock. The album went on to sell only 15,000 copies. Pentagram have had a brief touring history outside India; at the Sundance Music Festival in Estonia in 2003 and at the Glastonbury Music Festival in 2005.

Pentagram released their third album It’s OK, It’s All Good in 2007 on their own record label, Pentagram Music. The first single off this album "Voice" won the Song Of The Year and vocalist Vishal was awarded Vocalist Of The Year at the Jack Daniel's Annual Indian Rock Awards. "Voice" also received considerable airplay on VH1 India. The song was later used in a music video competition by the channel and Nokia, and the video that has been released features the contributions of various fans across India who sent in their videos.

The band released their latest studio album Bloodywood in March 2011 which is more electro influenced and has largely been considered a mediocre album.

In 2011, episodes of Penta TV which featured behind-the-scenes videos of the bands shows and tours were added to their site.

Why Book Pentagram Through ArtiseBooking?