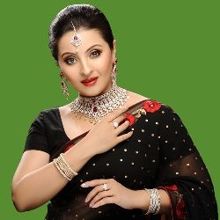 Prastuti Parashar is an Assamese Actress. She was born on 15 December, 1981 in Jorhat, Assam, India. She has acted in a number of Assamese movies and in stage dramas. She is one of most popular among all Assamese Actresses.

Prastuti Parashar was born on in Johrat, Assam, India. She studied in Balyan Bhavan, Jorhat. She is also completed her B.Com at Jagannath Barooah College. She was Tomboy during her school days. In an interview Prastuti said that she was a very bright student and wanted to be an Engineer but later she changed her decision to become an Actress.

Prastuti made her debut through her first Maharathi movie. After that she worked in many Assamese movies like Tumi Mur Mathu Mur, Asene Kunuba Hiyat, Priya O Priya and many more.

She also acted in Television serires like Barnali, Nisar Nayak, Chakrabehu, Mahanagarh, Jonakat, Siharan, Major Saheb and Many more. She also won the best actress award at Moonlight Awards for the year 2008-2009.