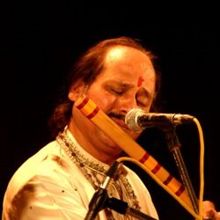 Ronu Majumdar (born 1965) is a noted Indian flautist in the Hindustani Classical Music tradition.
Born in Varanasi on July 28, 1965, Ranendranath Majumdar, popularly known as Ronu was trained under his father, Dr. Bhanu Majumdar, and later learned vocal music with the late Pt. Laxman Prasad Jaipurwale at whose behest he reverted to the flute. Pandit Vijay Raghav Rao, a music scholar, groomed Ronu into a concert flautist.
The bansuri flute was brought into the fold of Hindustani Classical music barely half a century ago by Pt Pannalal Ghosh, before which it was considered as a folk instrument. Ronu's speciality is the "Shank Bansuri", a 3-foot-long flute (0.91 m) of his own design, which adds an extra dimension at the lower scales.
In 1981, Ronu Majumdar won the first prize at the All India Radio competition, and the President's Gold MedalIn 1996,Ronu received a Grammy nomination for his work on the album Tabula Rasa with Bela Fleck, the American banjo virtuoso. He has associated with Pandit Ravi Shankar in albums like Passages, and Chants of India. He has more than 30 audio releases to his credit. He has won prestigious Aditya Vikram Birla Award for the year 1999 for his dedication to music.Sahara India Pariwar felicitated him with lifetime achievement award on occasion of Jyoti Diwas 2001.
Today, Ronu Majumdar is among the more popular musicians on this instrument, and is especially popular with the younger generation for his creative improvisations. Pt Majumdar's music is rooted in the Maihar gharana which has musicians of eminence like Pt Ravi Shankar and Ustad Ali Akbar Khan to its credit. Apart from his concerts all over India in different music festivals, he also participated in the Festival of India in Moscow and Asiad '82 in New Delhi. He has toured extensively in Europe, the USA, Canada, Japan, Singapore, Thailand, Australia, New Zealand and the Middle East.
Pt. Majumdar is also known for a number of collaborations and jugalbandis with other leading instrumentalists. An innovative composer, he has also composed several pieces in a fusion of Hindustani classical with other forms of music, particularly Western Classical Music, including the projects Carrying Hope (Music Today), A Traveller's Tale, Song of Nature (Magnasound), Kal Akela Kahan (Plus Music). He has also provided short training sessions to budding young artists like Raghavendran Rajasekaran from Singapore.