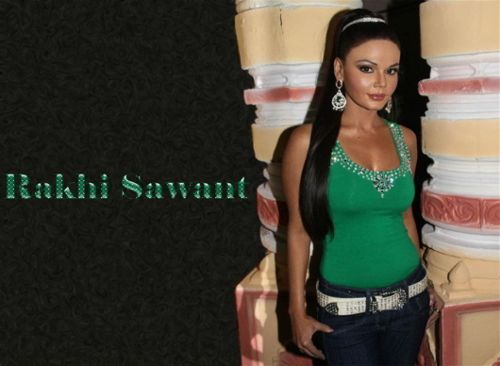 Rakhi Sawant (born on 25 November 1978) is an Indian dancer, Hindi film and television actress and television talk show host. She has appeared in many Hindi films and few Kannada, Marathi, Telugu and Tamil films in roles commonly attributed to item girls. Rakhi attended Goklibai High School in the Vile Parle suburb of Mumbai and later studied arts at Mithibai College. She is the sister of film director Rakesh Sawant and former actress Usha Sawant. In 1997, Rakhi debuted with the unnoticed film Agnnichakr as Ruhi Sawant. She continued acting in some more low-budget Bollywood films. She did few small roles & dance numbers as a junior artist in films like Joru Ka Ghulam, Jis Desh Mein Ganga Rehta Hain & Yeh Raaste Hain Pyaar Ke and went unnoticed. Rakhi Sawant performing at Nach Baliye 3 in Madhuri Dixit's famous getup. In 2003, she auditioned for an item number in the Bollywood movie, Chura Liyaa Hai Tumne. She auditioned about four times before being finally selected for her breakthrough item number, "Mohabbat Hai Mirchi", composed by Himesh Reshammiya. She also bagged a small role in the film for which she gained visibility. After that, Sawant acted in small roles in some more films including Masti & Main Hoon Na In 2005, she appeared in the music video "Pardesia" of music album D.J. Hot Remix-Vol.3 & gained popularity for her dancing abilities. After this, she featured in music videos of many other music albums & Bollywood item numbers.

Why Book Rakhi Sawant Through ArtiseBooking?