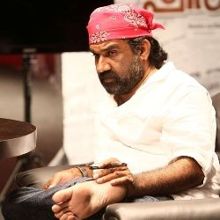 Ranjith Balakrishnan is an Indian film director, screen writer, producer and actor known for his work in Malayalam Cinema. He was born on 4 September, 1964 in Balussery, Kozhikode, Kerala. He is popular for the films Thirakkatha (2008), Paleri Manikyam (2009), Pranchiyettan & The Saint (2010), Indian Rupee (2011), Spirit (2012). In the year 2001, Ranjith made his directorial debut with Ravanaprabhu a sequel to Devaasuran. His career spanning over two decades he has scripted several commercially successful films including.

Ranjith was born on 4 September, 1964 in Balussery in Kozhikode. He graduated from school of Drama and fine arts, Thrissur in 1985. During the late eighties tried his hand at skits and Television serials for Doordarshan. In 1987 he made his debut as a writer in Oru Maymasa Pulariyil directed by V.R Gopinath. In the year 1988, Ranjith made his formal entry into the film world by writing the story for Orkkapurathu, a fun-adventure film directed by Kamal with Mohanlal in the lead. The immediate success of Orkkapurathu brought Ranjith several chances to work in films. In the late eighties and early nineties, Ranjith wrote scripts for several small budget films mainly for Kamal, including Peruvannapurathe Visheshangal (1989), Pradeshika Varthakal (1989), and Pookkalam Varavayi (1991).

The year 1993 was a huge turning point in Ranjith career. Devasuram, his film based on the life of Mullassery Rajagopal, a fatherlike figure to him, turned into a huge hit at the box office. With Mohanlal in the lead and directed by I.V. Sasi, Devasuram was both crtically and commercially a very big success. Mohanlal's performance was highly appreciated and it opened a new genre of feudal stories in Malayalam cinema.Within two month of the release of Devasuram. The year 2000 began with the release of Narasimham, directed by Shaji Kailas. With Mohanlal playing the lead role, this film became one of the biggest hits ever in the history of Malayalam cinema till then. Yet again in 2000, together with Shaji Kailas, Ranjith repeated history. His Onam release Valliettan starring Mammooty was a commercial success. (Last script for Shaji Kailas). With this film, Ranjith became the most successful scriptwriter of the time. In 1998 Ranjith scripted Summer in Bethlehem, directed by Sibi Malayil, starring Suresh Gopi and Jayaram, a super hit. In 1999, Ranjith and Shaji Kailas produced the film Ustaad, directed by Sibi Malayil, starring Mohanlal. This film, written by Ranjith was a super hit at the box office.

In the year 2010, Ranjith wrote the story for the film Penpattanam, directed by V. M. Vinu. He then scripted and directed, Pranchiyettan and the Saint, starring Mammooty, was also widely accepted by movie buffs and the common people of Kerala,an excellent movie. It became the most popular film of the year and was also a commercial success. He is also occupied in the respected position of School Director for Cochin Media School, first authentic Film & Broadcasting Institute in Kerala. He then produced and scripted for G. S. Vijayan's Mammootty starrer Bavuttiyude Namathil in 2012 which was a hit at the box office. His next film with Mammootty, Kadal Kadannoru Mathukkutty, in 2013 became profitable, but underperformed at the box office.

Why Book Ranjith Through ArtiseBooking?