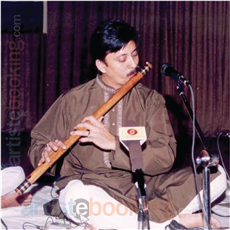 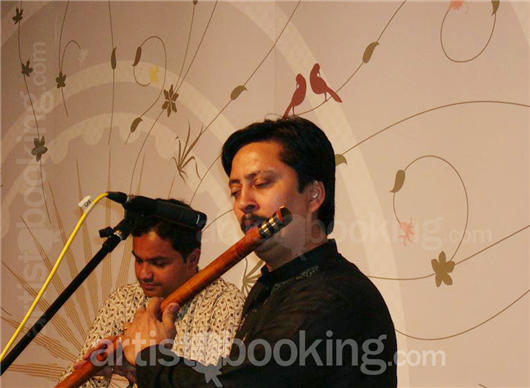 Rohit Anand is the disciple of the legendary Sarod Maestro Ustad Ashish Khan (grandson and disciple of Acharya Baba Allauddin Khan and son of Ustad Ali Akbar Khan) of Maiher Senya Gharana, who is a great composer of classical & fusion music. He is also learning vocal of Dhrupad Ang (Style) from Pandit Krishna Datt Sharma.

Rohit Anand has been inspired by his father, Late Shri B.M. Anand, to step into the field of music by playing flute. His father was himself a renowned figure in the field of Fine Arts. To enrich his talent Rohit joined Gandharva Mahavidyalaya, New Delhi. But his thirst for music took him to a great legendary Sitar Maestro Pt. Ravi Shankar, where he learnt flute for several years under the tutelage of Panditji. After that Rohit went to Sarod maestro Smt. Sharan Rani and learnt music under "Guru Shishya" Parampara of the Maihar Senya Gharana.

Rohit Anand is also committed to his instrument, and has made finest-quality flutes, which have received acclaim. He has the credit of making the world's smallest Indian Bamboo Flute, which can play up to two octaves and is only six inches long. This has found him a place in the Limca book of records for the year 2000. Flutes made him are highly appreciated by great Maestros and famous flute players all over the world. These days he is immersed in digging out the hidden treasure inside the hollow piece of bamboo, which is a gift of nature. He has researched on the intricacies of various qualities and technical aspects of the flute making and playing. Presently he is working on a book named "CONTEMPORARY EVOLUTION OF INDIAN BAMBOO FLUTE (AESTHETIC)".

He is teaching flute playing to number of students in India & abroad. Recently he released a CD on Indian flute Classical and Fusion music in Singapore and Australia named INDIAN CITY.

Rohit has performed widely all over the country and abroad in various music festivals. In India he participated in the festival organised by Pandit Chaturlal Memorial Society, Jugalbandi festival organised by Kala Vihar Society, in which he played flute in Dhrupad style with dhrupad vocalist, performed in Indraprastha Festival organised by Sahitya Kala Parishad, New Delhi. He performed several times in International Sufi Music Conference at Hazrat Inayat Khan Dargah, New Delhi. He played spritual music for Osho Utsav, Brahma Kumari Organisation, Aurobindo Ashram etc. He also performed in Rakhamaninov Music Club in Russian Centre of Science & Culture. He played flute and composed music in a speech performance programme "The Execution of Precious Memories" (Die Vollstrechung Kostbarer Erinnerungen) by Blixa Bargeld, a German production held at Max Mueller Bhavan, New Delhi. Other than touring India, he has been to Singapore, Bangkok, Hongkong, Afghanistan, Holland and Japan with his flute. He is an established artiste in the empanelment of ICCR and he was sponsored to Sri Lanka, South Africa, Singapore, Malaysia and Japan through ICCR, New Delhi. He is also an empanelled artiste of Central Sangeet Natak Akademi, New Delhi and performed in the Sangeetotsav festival, Bhopal in September 2001, organised by Sangeet Natak Akademi, New Delhi in collaboration with Ustad Allauddin Khan Sangeet Academy, Bhopal. He has been interviewed by a number of TV Channels and has given lecture demonstrations and conducted workshops in schools and colleges, the recent most being at the DIPR (Defence Institute of Psychological Research) in the DRDO (Defence Research and Development Organisation) campus at Timarpur, New Delhi as part of their Continuing Education Program (CEP).

In March 2002, He worked as Music Director and composer for Jahan-e-Khusro - a production of Muzaffar Ali and composed music for acclaimed artists like Abida Parveen (Pakistani Sufi Singer), Shubha Mudgal, Sufis of Sudan, Iran, Rajasthan, Kashmir, Lucknow and Bangladesh etc. In February 2003 Rohit ji was invited by the Department of Tourism, Rajasthan to perform in the different parts of Rajasthan for noted festivals. In this series he performed in Bikaner and the Desert festival, Jaisalmer. which attracts a very large and enthusiastic audience of approximately 45,000 from all over the world.

Rohit Anand has been a brilliant student in academics and is a qualified Telecommunication Engineer. He also has a keen interest in expressing himself through poems, which have been regularly published in newspapers and magazines.

Rohit Anand is associated with several spiritual institutions and theatre groups and has composed music for them and played music for meditation. He composed music and title song for a telefilm Atma-Shakti. A film for education has been made by NCERT on him regarding flute making and playing. Delhi Doordarshan also made a documentary on his achievement of being the proud owner of the smallest flute of the world.

Being a philanthropist to the core, he is also involved in music therapy, working with spastics and the mentally challenged. He has developed certain tones on the flute, producing frequencies which act positively on the affected portions of the brain impervious to other external commands. He has specialized in this line of treatment, which varies according to the disease and the patient's psychology. He is associated with international organizations in this field like Cozy Home, San Francisco, CA and Psychotherapy, Coromandal Valley, Australia etc.

He is running his own organisation named "AWARE" - An Association of World's Art & Research for Enlightenment. He is an art consultant in Rakhmaninov Music Club - An organisation affiliated to Russian Centre of Science & Culture. In the past, Rohit and his friends came together to form a group with Edvin Fernandes - a guitarist, pianist and keyboard player with Tabla - and named it SUFITRONICS.

Why Book Rohit Anand Through ArtiseBooking?