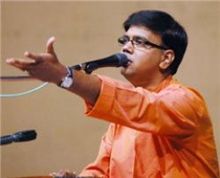 Dr. Saleel Kulkarni is an Indian Marathi Singer, Composer, Song Writer and Author. He was born on 6 October in Pune, Maharashtra, India. He is Renowned Marathi Music Singer. His Musical Journey started at the of three years and he also perfromed on All India Radio. Today he has created a successful career in Music for himself.

Saleel Kulkarni was born and brought up in pune the cultural capital of state Maharashtra. His singing prowess was unearthed at the age of three years when he sang the Marathi Prose 'Jayostute ' on All India Radio, Pune station. Thereafter, he undertook key lessons in singing and music from eminent personalities like Pandit Gangadharbuva Pimpalkhare, Jaymalabai Shiledar and Pramod Marathe. Formal education wise, Salil is a medicine graduate and was working as a doctor for the early part of his career. Extreme love for music, passion to craft quality tunes and his unending desire to contribute in the art-culture realm forced him to abandon his set medical practice – only to plunge into industry as independent artist. Born and brought up in Pune, he excels in harmonium. While working as a music director for the last ten years, he has composed songs for Hindi and Marathi albums, serials and films. Salil has been married to National Award winning singer Anjali Kulakarni, daughter of veteran singer Smt, Anuradha Marathe. He has two children – Son Shubhankar who had made a royal entry in Marathi music with his exemplary singing for kid's movie 'Chintoo' and daughter Anannya.

As a singer, Salil has rendered his voice for many composers for albums and shows. In the role of established and adored music director, he had cast many singers to sing different genres of songs. Some of the artists that have sung/recorded for Salil Kulkarni include Bela Shende, Shankar Mahadevan, Hariharan, Shreya Ghoshal, Sandeep Khare, Hrishikesh Ranade, Suvarna Mategaonkar, Shubha Joshi, Madhura Datar, Vibhavari Deshpande, Avdhoot Gupte and many more. Salil played Judge for competitive singing reality show "Sa Re Ga Ma Pa" on Zee Marathi where along with assessing the performances of participants, he mentored and nurtured many upcoming talented individuals.

Salil has teamed up with Sandip Khare, a talented & popular poet from Pune for crowd puller quality show 'Ayushyawar Bolu Kahi' . more than 900 times. Salil was also a part of Marathi SaReGaMaPa as judge and mentor. Salil has taken musical concerts all over the world including UK, US, Singapore, Switzerland, Shanghai etc.