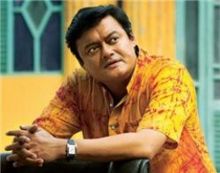 Saswata Chatterjee is an Indian Bengali Actor and Television Actor. He was born on 19 December, 1970 in Kolkata, India. He is popular as Apu in Bengali Entertainment Industry. Apu started his career through Hindi television show "Kaalpurush". He enjoyed the success at the national level in Sujoy Ghosh in 2012 blockbuster Hindi film Kahaani, where he played a simple looking creepy contract killer.

Chatterjee was born on 19 December, 1970 in Kolkata, to the family of Shubhendu Chatterjee, a Noted Bengali Actor. Since Childhood, Chatterjee loved to watch a lot of theater and enact scenes in front of mirror. He lived in Kolkata and married to Mohua a teacher the actor has one daughter.

Chatterjee started his career with a Television serial directed by Saiba Mitra, based on Samaresh Majumdar Kaalpurush. Later he acted on a television series directed by Sandip Ray where he portrayed the character of Topshe, After this television debut, his acting skills were appreciated and he gained popularity.

Why Book Saswata Chatterjee Through ArtiseBooking?