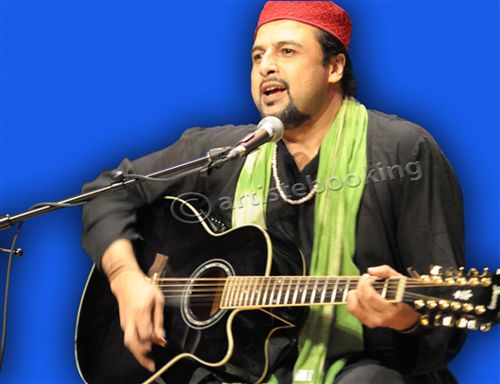 Junoon is a sufi rock band from Lahore, Punjab, Pakistan. The band formed in 1990, the band was formed by the lead guitarist and songwriter Salman Ahmad, who was soon joined by keyboardist Nusrat Hussian and Vocalist Ali Azmat. The Junoon band was Pakistan most known and successful band in Pakistan and all over World.

They are the pioneers of sufi rock with an original sounds they achived sucess during the early 1990's. Its members signed to major records label EMI Records and afterwards released their self titled debut album Junoon in 1991. After two year, the band recorded their second album Talaash in 1993 with their new bassist Brain O'Connell after Nusrat Hussain left the band. The Band was formed in 1990 when Salman Ahmad, Founder, Songwriter and Lead Guitarist, he had a dream where one of jis teachers shook him and said "Tumhey Mousiqui Ka Junoon Hai". Junoon were not an over night success. The band was stuggled for the fist few years and released their first album name as Talaash directed by Atiqa Odho and written by Anwar Maqsood, based on the ture story of the band in which the band members acted themselves and due to its novel story line it become an extremely popular television series in Pakistan. In 1994, Junoon started working on their third studio album. In 1995 the band released their first compilations album Kashmakash, which was the first such compilation album by a band in Pakistan. In 1995 was also the first band who set up their website, which was the first ever website of any Pakistani music group.

After their first success in 1994 the band become famous and Known in Pakistan. Following the success of "Inquilaab" in 1997 Junoon went on their first full scale tour of the United States, performing from Birmingham, Alabama to Los Angeles where they appeared at the House of Blues and at the New York's Roosevelt Hotel, which was reviewed in the International edition of Newsweek Magazine.

In March 2001, Junoon released its sixth studio album, Andaz (titled as Ishq in Pakistan). The album topped the music charts in Pakistan as well as in the Persian Gulf and South Asia. The first single entitled "Zamanae Ke Andaz (Saqi-Nama)" made it to No. 1 in the Persian Gulf and to No. 5 on the Asian charts. In April, Junoon performed to a sold out concert at the Wembley Arena in London and went on to perform at the "United for Gujrat" concert, the first South Asian rock concert, held in New Delhi along with bands from India and Bangladesh, singing together to raise funds for the Gujrat Earthquake victims. In June, Salman Ahmad attended the UN General Assembly in New York where he was appointed as the 'Goodwill Ambassador' of Pakistan by United Nations. On 30 June, Junoon performed at the Celebrate Brooklyn festival at Prospect Park Bandshell in Brooklyn, New York. On 7 July, the band performed at the Hyatt Regency in Chicago, Illinois. In September, Junoon did a concert in Norway with Morten Harket, lead vocalist of A-ha, performing a duet "Piya (Ocean of Love)". The same year, the band also made a trip China to perform a peace concert. Junoon won the "Best International Group" award at the Channel V Awards in New Delhi in 1998, beating Prodigy, Sting and Def Leppard. The Band's first international release Azadi, went triple platinum in India alone. "Sayonee" was at the top of the Mtv India and Channel V charts for over two months. Junoon won the Award for "Best Rock Band" at the Indus Music awards in 2004. Indus Music Awards and from ARY Asian/Bollywood Awards. Junoon has also been awarded several awards for their contribution towards peace and South East culture by BBC, UNESCO and South Asian Journalists Association. Junoon was nominated for Best Musical Group at the Lux Style Awards several years in a row