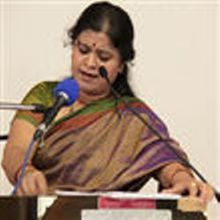 Sangeetha Katti is an Indian kannada Playback Singer. She was born on 7 October, 1970 in Dharwad, Karanataka, India. She was recently awarded the prestigious Suvarna karnataka Rajyotsava award, 2006-2007 by the Karnataka State Goverment.

Sangeetha was born in musical family of H.A.Katti and Smt. Bharati Katti. She received intial lessons from her father at the age of four. She met Naushad Ali which she considered a turinig point in her Life, she become the student of Naushad. She is also the student of Sheshagiri Dandapur and Pt. Chandershekhar Puranikmath, Sangeeta received advanced training in classical vocals from Padmabhusan Pt. Basavaraj Rajguru of Kirana and Gwalior Gharan for about 12 years. She is presently under the tutelage of Padmavibhushana Gana Sarswati Smt Kishori Amonkar of the Jaipur Atrauli Gharana.

Sangeeta Katti has the privilege of having worked with the leading Music directors like Upendra Kumar, M.Ranga Rao, Vijay-Bhaskar, MM Keerawani, C Ashwath, Hamsalekha and Others and sung with leading maestros of India like Dr. M Balamurali Krishna, Dr.S.P.Balasubramanyam, Dr. K.J. Yesudas, Dr. Rajkumar, Dr. P.B Srinivas and others. Sangeeta is a 'A' grade artist in Classical and Light Music both on AIR and television, as a rich experience of singing nine different languages. Sangeeta Katti is residing in Bangalore, India with her husband Sri. Manmohan Kulkarni and her two kids Chi. Savani Kulkarni and Chi. Ninad Kulkarni, musing on music. Sangeetha to date has over 2500 concerts to her credit, her very first performance being at the age of four. She has also performed in the United States, UK, and Canada. She is a regular feature in most of the important music festivals in India. She was a teaching faculty in Hindustani Vocal music at Bharathiya Vidya Bhavan, Bengaluru.

Why Book Sangeetha Katti Through ArtiseBooking?