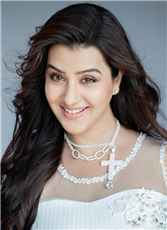 Shilpa Shinde is an indian television actress. Shilpa is currently working in Bhabhi Ji Ghar Par Hai! as Angoori Monmohan Tiwari. Shilpa had also acted in a DD1 serial Miss India, Hatim on Star Plus and as Chitra in the prime time serial on Star Plus, Sanjeevani - A Medical Boon. Shilpa has acted in two Telugu films-Deshari Narain Rao's "Chhina" and Suresh Verma's "Shivani".

Shilpa had started her career in 2000 with a negative role in Bhabhi. She is known for her roles in Amrapali and Meher.She also worked in Hari Mirchi Lal Mirchi (2002) and is famous as Koyal in Chidiya Ghar,before she quit the show in March 2013.

Shilpa Shinde and Romit Raj were all set to tie the knot on November 29,2009 before it was called off at the last moment. Shilpa is also a good indian classical dancer specially in Kathakali.

Why Book Shilpa Shinde Through ArtiseBooking?