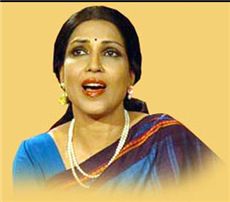 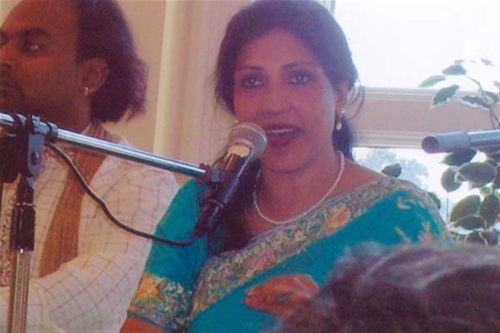 Shevanti Sanyal is well known to the lovers of devotional music and ghazals in India. In a career spanning twenty-five years, she has enthralled audiences across the country and abroad. Well grounded in classical music, Shevanti Sanyal is known for melodious and soulful rendition of bhajans, and for emotive and expressive rendition of ghazals. She is a “top grade” artiste of All India Radio and Doordarshan, and has performed in numerous public concerts and festivals all over India sponsored by prestigious organizations like All India Radio, Doordarshan, State Cultural Centres, Sangeet Natak Akademi and Sahitya Kala Parishad, to name a few. Shevanti Sanyal’s music recital was featured in the esteemed All India Radio National Programme of music and on Doordarshan’s National Network. She has delighted audiences in the USA , Canada, Russia and Mauritius. She toured Mauritius and performed at various places during the Shiv Ratri festival as an ICCR (Indian Council for Cultural Relations) sponsored artiste in March 2002. In 2006 she enchanted audiences in States and Canada with her mellifluous singing and performed at the Indian Embassy in Washington for the prestigious Independence Day celebrations. She has lent her voice to tele – serials, and has been featured in bhajan and ghazal programs telecast by various private television channels like Zee TV and ETV. Shevanti Sanyal has a very successful ghazal cassette, titled “Hayat” to her credit, Her Audio Cassettes of bhajans, titled “Krishna Naam Sukh Dham”, “Ram Sancho Tero Naam”, “Ma Ne Bhavan Bulaya Hai”,  “Man Mandir Bhagwan”,  “Shanti Pushp” have been very popular and has made two albums for Shree Ram Sharnam Delhi.