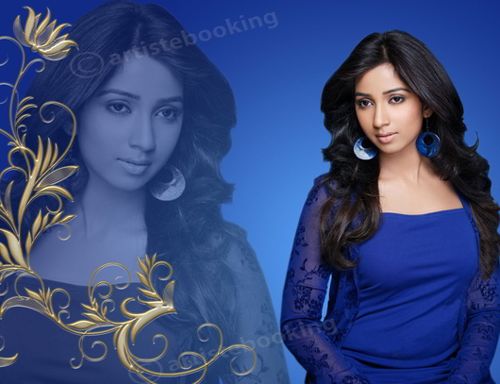 Shreya Ghoshal is an Indian Playback Singer. She was bron in 12 March, 1984 in Berhampore, West Bengal, India, she belongs to a Bengali Family her parents name is Bishwajit Ghoshal and Sarmistha Ghoshal. Shreya parents shifted to Rawatbhata near Kota, Rajasthan, because her father was posted for work assignment in Rajasthan, when shreya was three month old, and she spent three month in her birth palace. She studied from ninth stand to higher secondary in Atomic Energy Central School, Rawatbhata. Mainly she sings in Hindi films as well as in other Indian languages like Assamese, Bengali, Gujarati, Kannada, Malayalam, Marathi, Nepali, Oriya, Punjabi, Telegu, and Tamil. She has established herself as a leading female playback singer in Indian Cinema.

Shreya was born in West Bengal and raised up in Kota, Rajasthan. Her mother is a singer and both of her parents are very much culturally inclined and they were very much involved with all those cultural activities. During those activities, as a small child she picked up her first lessons of music. She used to sung the same songs with her immature words whatever her mother sang during rehearsals. It is during those days her potentials of singing was discovered by her parents. At the age of 4, she started learning music from bengali songs from her mother, her mother was her first Guru. Her mother gave her a chance to sing in her club annual function, when shreya was 6 year old she joined and getting formal training in Hindustani Classical Music, she has been taught by Rakesh Sharma in Kota, Shri Jayawardhan Bhatnagar, her school's music teacher and thereafter, from Mahesh Chandra Sharmaji in Kota. She got her intial exposure to hindi film songs and rajasthani folk from Shri Bhatnagar. She received training in playback singing from Padmashree Late Kalyanji Bhai at later stage. After shifting to Mumbai she continued her training in Classical Hindustani Music with Late Mukta Bhideji.

In 1995, Ghoshal became the winner of the All India Light Vocal Music Competition in New Delhi, which was organised by the Sangam Kala Group, in the Light Vocal group at a sub-junior level. She made her first on-screen appearance Awaz Nayi Andaz Wohi, which was aired on the channel EL TV. Kalyanji-Anandji and Pandit Rajan and Sajan Mishra served as the judges. She made her first studio recording with the show in 1996. As a child, she won the 75th Children's Special episode of the Sa Re Ga Ma (now Sa Re Ga Ma Pa) contest on Zee TV. She was successful in later episodes of Sa Re Ga Ma when she participated there for a second time. Ghoshal's last connection with Sa Re Ga Ma was the "mega-final" held during the 200th episode on January 1999. It included such judges as Ustad Zakir Hussain, Pandit Ram Narayan, Ustad Vilayat Khan, Girija Devi, Anil Biswas, and Pandit Shivkumar Sharma. Ghoshal was declared the winner of the competition.

Shreya Began her career when she won the Sa Re Ga Ma Pa contest as an adult. Her bollywood playback singing career began with Devdas, for which she received National Film Award for Best Female Playback Singer along with Filmfare Award for Best Female Playback Singer and Filmfare RD Burman Award for New Music Talent. Since then, she has received many other awards. Ghoshal was also honored from the U.S. state of Ohio, where in Governor Ted Strickland declared June 26 as "Shreya Ghoshal Day".

In 1998, Ghosal started recording albums in Indian Regional Languages mainly in bengali albums with the label sagarika. Her first studio album was Bendhechhi Beena, which was released in 1 January 1998, with 14 tracks. Some of her earlier albums include O Tota Pakhi Re, Ekti Katha (1999), Mukhor Porag (2000), and many more, all in the Bengali language.

Entry In The Bollywood and At Present

Shreya caught the attention of director Sanjay Leela Bhansali when he saw 75th childern special episodes of Sa Re Ga Ma with her mother, after her performance Bhansali made up his mind that he would select the girl for her next project. Bhansali find innocencey in her voice that he need in her next movie Devdas for Paro. He faced some problem in to find shreya at last he contacted to the Gajendra Singh the creator of the show and he provide shreya's detail to contact her. In 2000 Bhansali and music director Ismail Darbar offered her the opportunity to be the voice of Paro in Devdas, which portrayed by Aishwarya Rai. In This movie shreya almost sing 5 songs these are Silsila Ye Chaahat Ka, Bairi Piya, Chalak Chalak, Morey Piya and Dola Re Dola. All songs are successful songs in Industry.

While she worked for Devdas movie she was 16 years old and gained so name in music industry. Through to this movie she achieve national fame and awards such as a Filmfare Awards for best Female Playback singer. After that she was offer in many movies like Munna Bhai M.B.B.S., Shart: The Challenge, Tujhe Meri Kasam, Julie Ganapathi, Thoda Tum Badlo Thoda Hum, and Desh Devi Maa Ashapura.[21] Ghoshal was a playback singer many times in 2003 for films such as Saaya, Jism, Tujhe Meri Kasam, Armaan, Xcuse Me, Inteha, Out of Control, Munna Bhai M.B.B.S., and LOC Kargil. In 2004, Ghoshal lent her voice to various composers for films like Plan, Khakee, Shikaar, Tum – A Dangerous Obsession, Muskaan, Krishna Cottage, Main Hoon Na, Aan: Men at Work, Girlfriend, Garv, Dhoom, Phir Milenge, Tumsa Nahin Dekha – A Love Story, King of Bollywood, Shukriya: Till Death Do Us Apart, Rok Sako To Rok Lo, Musafir, and Dil Maange More. Some of Shreya's favourite songs during this period are "Silsila Ye Chahat Ka from Devdas and "Aye Meri Zindagi" from Saaya.

She has received State Film Awards from the Malayalam and Tamil industries and Filmfare awards in Hindi, Malayalam, Bengali, Kannada, Tamil, and Telugu industries. She debuted in the South through the song "Yen Chellam" in Vasantha Balan's Tamil film Album, and she received success after singing "Munbe Vaa" from Sillunu Oru Kaadhal under composer A. R. Rahman. She debuted in Malayalam through a studio album of composer Alphons Joseph and later gave voice to his song "Vida Parayukayano" from Big B. Her songs in the Malayalam film Anwar became hits in Kerala and topped several charts. She is known for her frequent association with Malayalam music director M Jayachandran. In 2010, Ghoshal sang for the English independent film When Harry Tries to Marry.

In 2013 she performed in various place in Australia and New Zealand as the Brisbane Convention & Exhibition Centre, In Melbourne for Dallas Brook Center, Sydney Opera House in Sydney and etc. In 2013 Shreya has also tribute to the casualities of an excessive rainfall in Mauritius at The Swami Vivekananda International Convention Center in Pailles.

In 2013, Ghoshal collaborated with singer Kailash Kher for the first time for a mission named "The Project Resound: Upgrade your Ears", in which they composed a song of their own named "Naina Chaar". The mission, which was initiated by Sony Music India, aims to make people aware of the rising technological advancement in the field of music, which may make it difficult to distinguish between noise and music. This project also promotes the use of Sony headphones. Regarding this mission, Shreya said, "For the past two years, I have been craving to do something different...the kind of sound and experimentation you don't get in the daayra of Bollywood. It's only when you get this kind of independence that your music takes flight."

Why Book Shreya Ghoshal Through ArtiseBooking?