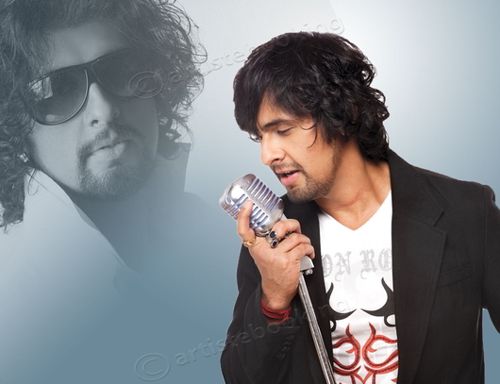 Sonu Nigam is an Indian Playback Singer, Actor, Composer. He was born in ( 30 July 1973 ) Faridabad, Haryana, India. He is the son of famous singer Agam Kumar Nigam. Nigam has mainly singing in Kannada and Hindi Languages, he also sung in other many languages such as Oriya, Tamil, Assamese, Punjabi, Bengali, Malayalam, Marathi, Telugu, and Nepali movies. He also worked as actor in few movies. His genres are Pop Rock Singing, Classical, Semi-classical, Ghazals, Playback Singer.

Sonu Nigam was born at Faridabad in a Kayastha Family in 1973. Sonu has started his career at the age of 4 when he join his father on stage first time for Mohammed Rafi song "Kya Hua Tera Vaada". After that he joined his father and sing with him in parties and weddings. After some times he moved with his father to Mumbai and then in age of 19 he started his career in Bollywood at the age of 19. He was trained by Ustad Ghulam Mustafa Khan who is a classical singer, he trained Nigam in Classical Music.

Nigam has faced many problem in starting up his career, when he come to Mumbai. He began singing cover songs of Mohammed Rafi song, mainly for a number of "Rafi Ki Yaadein" albums released by T-Series. Gulshan Kumar gave him chance to sing in between a large audience, in these years Nigam singing style is regard as "Rafi Clone". Nigam first song was from a Janam movie in 1990 but that movie was never released officially. After that he started working as radio Commercials and hosting show, Nigam has hosted The Popular show Sa Re Ga Ma first season in 1995 airs on 1 May.

Soon After some he sang Achha Sila Diya in 1995 for Bewafa Sanam was popular song by him. His first major success with Anu Malik composed song Sandese Aate Hai in 1997. After "Yeh Dil Deewana" for Pardes movie his image was totally changed from Rafi clone his own unique singing style. Sonu's Album "Deewana", with music directed by Sajid-Wajid, was released by T-Series in 1999, revealing his talent for singing romantic songs and it remains one of India's most successful albums. Since then, he has created a unique style of his own and has become a role model for emerging vocal talent in India.

In 2006, Nigam hosted Life Ki Dhun with Sonu Nigaam on Radiocity 91.1 FM, where he had the opportunity to interview musicians, including Lata Mangeshkar in the episode aired last.

Nigam has also worked in movies, he is also worked as child artist in film Betaab in 1983. As an actor he worked many such as Jaani Dhusman, Kash Aap Hamare Hote, and Love in Nepal but he was not so success full in acting. So he has not returned as actor.

Why Book Sonu Nigam Through ArtiseBooking?