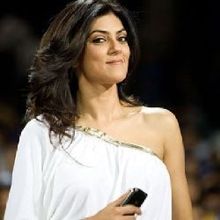 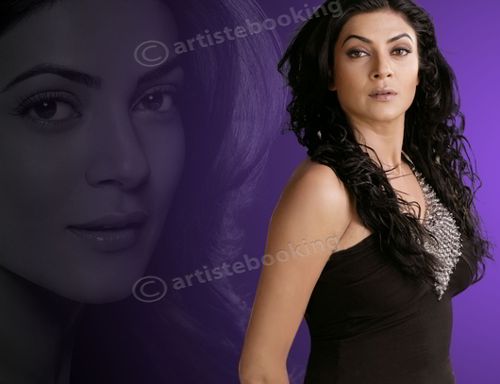 Sushmita Sen (born 19 November 1975) is an Indian actress and beauty pageant titleholder. She was crowned Miss Universe 1994,by outgoing title holder Dayanara Torres of Puerto Rico at the 43rd edition of the Miss Universe Pageant on May 20, 1994. She was the first woman of Indian origin to win the crown. After completing her reign, Sen went on to pursue an acting career in Bollywood movies. She started her career with Dastak, a movie rumored to have been based on her life. She rose to stardom in Tamil blockbuster Ratchagan; later, she attained commercial and critical recognition for her roles in Sirf Tum (1999) and the comedy Biwi No.1 (1999). The latter earned her the Filmfare Best Supporting Actress Award. She has also acted in commercially successful films such as Aankhen (2002), Main Hoon Na (2004) - her biggest commercial success so far - and Maine Pyaar Kyun Kiya? (2005). She received critical acclaim for her female-oriented roles in films such as Filhaal... (2002), Samay: When Time Strikes (2003), Chingaari (2005) and Zindaggi Rocks (2006). In 1994, as a teenager, Sen won the title of Femina Miss India beating Aishwarya Rai, who was the runner up. Sen represented India at the 1994 Miss Universe Pageant, held in Manila, Philippines and won there. She received critical acclaim and box office success for film Aankhen. So far, her biggest hit has been the 2004 movie Main Hoon Na, in which she starred as Shahrukh Khan's love interest. The film grossed a total of Rs 330,000,000 and was the second best selling movie of that year. Later, Sushmita played a lawyer in Main Aisa Hi Hoon opposite Ajay Devgan. In 2005, she also starred in a remake of Cactus Flower, called Maine Pyaar Kyun Kiya?: Sen played the lead opposite Salman Khan and Katrina Kaif. Her most recent movies include Karma, Confessions and Holi (2006) opposite Naomi Campbell, Do Knot Disturb, Ram Gopal Varma Ki Aag (2007) and Dulha Mil Gaya (2010). Sushmita has signed three big project0s, one of which has been reported that she will portray the slain Pakistan Peoples Party leader Benazir Bhutto in a film co-produced by Zaid Aziz and Henna Rai of the Karachi production company Vox Vision, and Leicester-based Sum Films. Tentatively titled Benazir Bhutto: The Movie, the film will be shot in locations in Pakistan, the US, Britain and Dubai, where Bhutto spent years as a student and later as a political leader in exile.

Why Book Sushmita Sen Through ArtiseBooking?