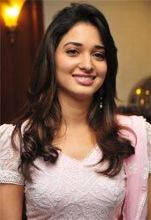 Tamannaah Bhatia is an Indian Film actress and model. she was born on 21 December, 1989 in Mumbai, Maharashtra, India. She started her career from South Indian Movies. She made her acting debut in the Bollywood film Chand Sa Roshan Chehra before working in the major projects in South Industry she appeared in Teleugu film and she made her debut in Telegu movies with Sri after that she appeared in her Tamil Kedi. After working in many commercial hits movies, she made herself as one of Telugu cinema Leading contempory actresses.

Tamannaah Bhatia was born on 21 December 1989 in Mumbai, Maharashtra, India, to Santhosh and Rajani Bhatia and she has an elder brother, Anand. Her father is a diamond merchant. She is of Sindhi descent. She did her schooling in Maneckji Cooper Educational Trust School, Juhu, Mumbai. She later changed her screen name for numerological reasons, varying it slightly to Tamannaah. She has been working since the age of 13 since she was spotted at her school’s annual day function and offered the lead role which she took up, and then also became a part of Mumbai's Prithvi Theatre for a year. She also appeared in the music video of Lafzon Mein Keh Na Saku by Abhijeet Sawant, the winner of the first Indian Idol.

Tamannaah started her acting career in 2005, essaying the female lead role in Chand Sa Roshan Chehra, her only Hindi film to date before Himmatwala. The same year, she debuted in Telugu cinema in Sri, playing the leading female role opposite Manoj Manchu. In 2006, she made her debut in the Tamil film industry in Kedi, produced by A. M. Rathnam, along with Ravi Krishna and another newcomer, Ileana D'Cruz. In 2007, she had three releases. After her role in the unsuccessful Vyapari, Tamannaah rose to popularity with the Sekhar Kammula-directed Telugu film Happy Days which received positive reviews and became her first major box office success. Her next release was the Tamil drama film Kalloori, directed by Balaji Sakthivel, that won her accolades and critical acclaim in Tamil as well. In 2008, Tamannaah again had three releases, appearing only in cameo roles in two of them.

In March 2013 she starred opposite Ajay Devgan in her second Hindi film, Himmatwala, which is a remake of the 1983-film with the same title. She then appeared in Thadaka, the Telugu remake of the 2012 Tamil hit Vettai, opposite Naga Chaitanya. She has signed her next Hindi films, Entertainment opposite Akshay Kumar and Sajid Khan's Hamshakals opposite Saif Ali Khan. In December 2013, she joined S. S. Rajamouli's epic film Baahubali. In March 2014, she shot for a song in V. V. Vinayak's Alludu Sreenu.

Why Book Tamannaah Bhatia Through ArtiseBooking?